Pow Cows and the Real War in Ukraine

When I was a child, my mothers favorite saying was: “Fool me once, shame on you… Fool me twice, shame on me!” That was 60 years ago. Since then, our elected leaders and their accomplices in the media, have lied to us about regime change operations from Vietnam and Iran to Afghanistan, Libya, Iraq, Syria. During the past 2 years, these same people have repeatedly lied to us about the Corona virus, Masks, Lockdowns, PCR Tests and Clot Shots. So why should we believe anything that these pathological liars tell us now on any subject?

I have spent more than 20 years teaching college level courses in problem solving. The biggest problem we are facing right now is that some crazy people are trying to push us into World War 3 – a war which would not end well for any of us. In this article, we will examine why some people continue to believe those with a long track record of telling blatant lies. We will then propose some potential cures for this disease of naivity. Finally, we will look behind the curtain and expose the real war going on in Ukraine.

Denial is not just a River in Egypt
We have all tolerated lies and deception way too long. We simply want to live our lives in PEACE. We suffer from normalacy bias. It is time to admit that there is a group of people who are not like us. In order to avoid World War 3, we need to recognize that there are a group of people who want to control the world. Some have called these people Globalists. Others call them Nazis or Fascists or Neocons or Prism Partners or Fusion Agents or the Military Industrial Complex. The problem with all of these terms is that they are not very clear. I think we need a new term that more accurately describes the dangerous goal of this deadly group – namely, that they are People who Want to Control the World. I therefore think we should call these crazy people POW COWS – which simply stands for People who Want to Control the World. These Power Crazy people are willing not only to lie, but to destroy entire countries and even start World War 3 in order to control the world!

Here is a graphical image of a PowCow: 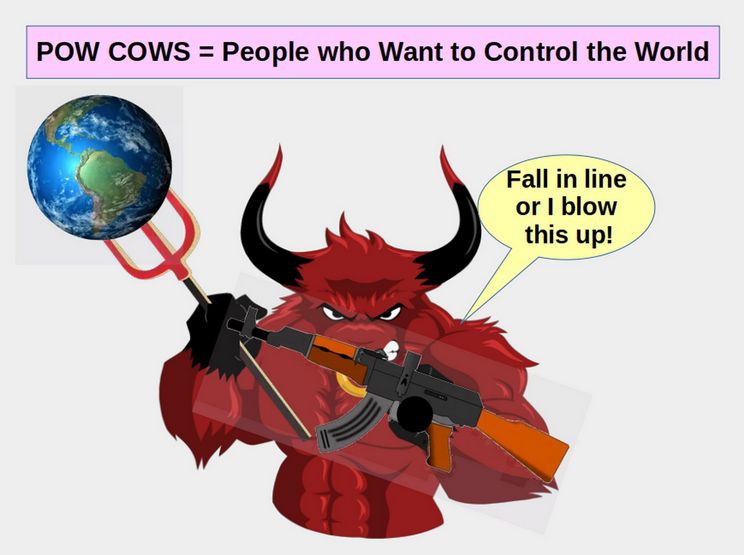 It is important to note that Pow Cows do not have an allegiance to any country. They have no problem destroying the US economy or killing everyone in Europe. They refuse to honor any laws. Things like killing people, breaking laws and wasting trillions of tax payer dollars are simply a means to an end… namely that they want to control the world - and in the process turn the rest of us into slaves living in a world wide prison camp.


We should also call the lying media what they really are Pow Cow accomplices – because together with the Pow Cows, they are committing the worst crimes in the history of humanity.

Pow Cows use a simple trick to control us. The whole point of all the lies is to create FEAR. The real goal is to get all of us afraid and fighting with each other. It is a divide and conquer strategy. One can think of the Pow Cows as a Propaganda Machine made up of several crime families all of whom use LIES to create people who are afraid.

Here is an image of the Pow Cows and their accomplices: 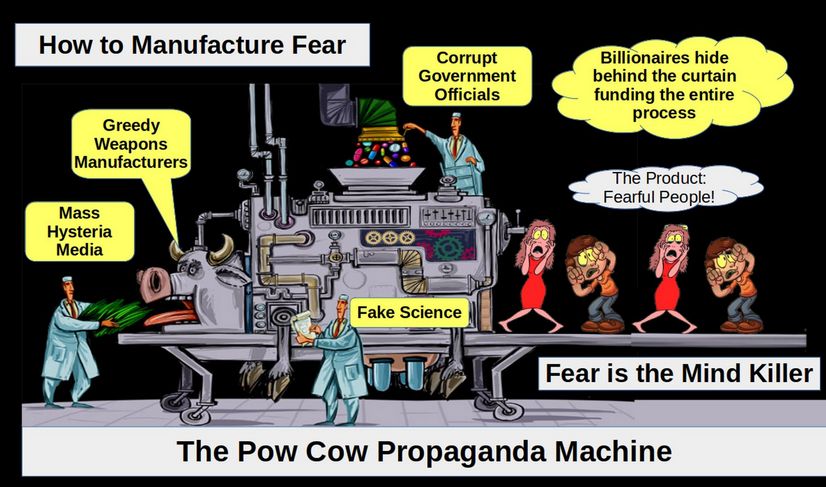 If Pow Cows are the Problem, what is the Solution?
But to beat the Pow Cows, we need more than a Unite and Overcome strategy. In a world filled with LIES, what we really need more than anything else is a way to recognize the lies and learn the Truth – because the Truth is the only thing that can set us free and keep us free.

Here are three ways to separate the Truth from the Lies:

#1 The Scientific Method
Science has gotten a bad name recently because the world is now filled with fake scientists who have been paid off by the Pow Cows. But real science is based on a principle called the Null Hypothesis. The Null Hypothesis states that any claim is assumed to be FALSE – and it is up to the person making the claim to provide evidence that the claim is not false. Assuming that all claims are false works very well in orur modern world dominated by Pow Cows. Note that nearly all claims made by the Pow Cow Media are not backed up by even the slightest attempt at providing evidence.

#2 Critical Thinking
Critical thinking has two components. The first component is being critical about any and all claims. Being critical means at least suspecting that the claim might be false. The second component is using our brains to actually think about what is being claimed.

Here are some questions that promote critical thinking:

Has any evidence been provided to support the claim?

Has there been any debate allowed about the pros and cons of the claim? Are there factors that have not been mentioned?

What is the underlying cause of the problem?

What is the history of the problem?

Who benefits financially from the problem?

#3 Researching Alternative Points of View
Are alternative points of view being censored? If so, why? Banning posts from Facebook and videos from YouTube are no different than the Nazis burning books – we all know where the book banning led to. Debate is an important part of the scientific method, critical thinking and problem solving. It should be promoted not discouraged. Those who prevent freedom of speech only promote an angry rebellion.

The Real War Going on in Ukraine
Once we see that the real enemies are the Pow Cows, and once we assume that everything we are told are LIES intended to promote fear, and once we apply critical thinking and take the time to do some actual research, it is easy to see that the real war going on in Ukraine is a war by the Pow Cows to take over the world. The real goal of the Pow Cows is not to protect Ukraine. It is to take over Russia. This is obvious if one were to read Putin’s speech (the link to which has been banned in the US). Basically what Putin said is that Russia will not tolerate having nuclear missiles (aka NATO) on their border.

This concern of Russia has not even been mentioned by the Pow Cow Media. Yet think back to the Cuban Missile Crisis. What did Kennedy say? The US would not tolerate having missiles in Cuba because it was too close to the US border.

Instead, the Pow Cow media made a big deal out of the 12 brave Ukrainian soldiers who fought to the death on a small island called Snake Island. Naturally, this story was not true. Here is a picture of the 12 brave soldiers all of who surrendered and were put on a bus without a single injury: 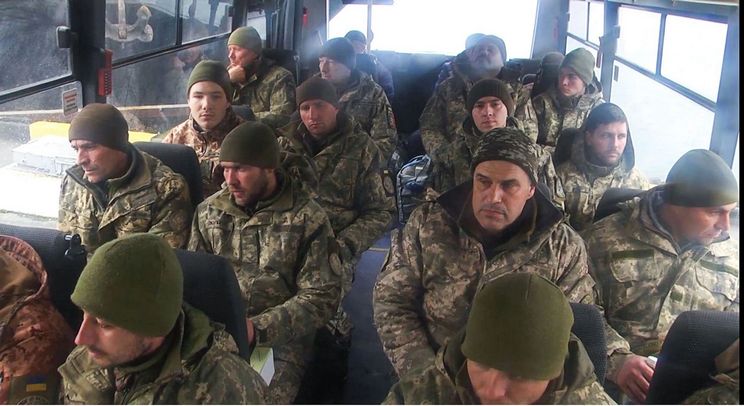 They were mad that their families had been told that they were dead when in fact they surrendered and were treated well and then returned home.

After being forced to admit the whole thing was made up, the Pow Cow media then told us that Russia had attacked the largest power plant in Ukraine – placing the whole world at risk. Turned out that this story was also a LIE. Russia had already taken control of the power plant and had a patrol going around the plant to protect it. The patrol found some thugs (that Russia claimed were Ukrainians trying to sabotage the plant). The thugs went into an administration building near the nuclear power plant. This administration building caught fire during an exchange of gun fire between the thugs and the Russians guarding the nuclear power plant. So the real story is the opposite of what was reported by the Pow Cow media.

As a result of the above two lies – and hundreds of other similar lies – Pow Cow politicians have been ramping up the threats.

The latest of these threats was Senator Lindsey Graham urging that Putin be assassinated. Pow Cows have a long record of killing people they do not like. Just look at what they did to Muammar Gaddafi after he said he wanted to go back to the Gold standard. Imagine if someone in Russia called for the murder of the US President. Threats like this could trigger World War 3.

Since the Pow Cow Coup that overthrew the elected government of Ukraine in 2014, Ukraine has become a Chicago-style cesspool of corruption in which a handful of oligarchs robbed the country blind. These Pow Cow front men arrested anyone who disagreed with them and either killed them or put them in prison.

What does the Future Hold?
Many around the world are wondering how they will pay for the rapidly rising fuel prices resulting from the Pow Cow sanctions against Russia. We should also be concerned about mass starvation as Russia and Ukraine were the biggest food exporters in the world. There is no doubt that losing these food supplies will lead to food prices rising even more rapidly than gas prices. Poor people will not be able to afford these massive food price increases – and starvation will follow. But by far the greatest threat is nuclear war.

This was why I wrote this article. Now more than ever, we all need to learn how to recognize the LIES of Pow Cows and seek out the truth. The consequences of continuing to believe Pow Cow lies is simply to great.