1 Why Boeing is Going Special Report


Welcome to our special 109 page report which explains for the first time why the Boeing 737 Max is such an unstable airplane that it crashed twice during its first two years of operation – killing a total of 346 people. This report, called “Why Boeing is going… The deadly path from blackmail to bankruptcy” is the most detailed study ever published on the problems of the Boeing 737 Max.

The report explains step by step how Boeing made a trillion dollar error - inadvertently creating a plane that is so unstable that it is literally designed to crash. This is not a problem that can be fixed with any software patch. This report provides evidence that it was not merely a flawed MCAS program or a flawed angle of attack sensor or flawed pilot training that led to two devastating crashes. While these were contributing factors, none of these facts explain why Boeing engineers were compelled to increase MCAS from 0.6 degrees to 2.5 degrees after field testing the 737 Max in 2016.

In this report, I explain why it is likely that one of the most complex forces in all of nature, a force called turbulence, was responsible for the need to radically change MCAS. I provide calculations showing that moving the new LEAP engine one foot forward and one foot higher than it was placed on the previous version of the 737 leads to a sudden increase in turbulence when the angle of attack exceeds 15 degrees. 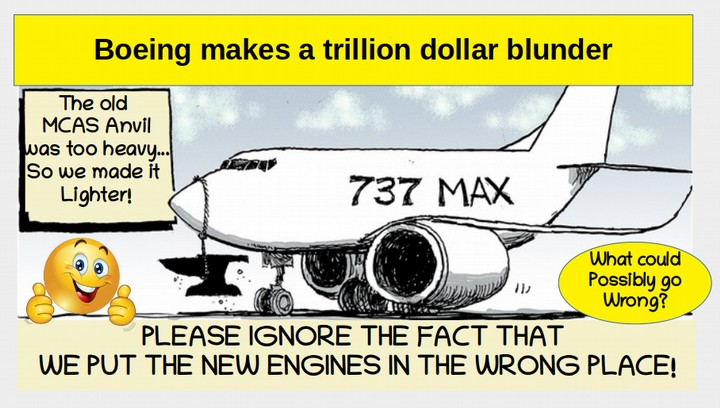 This hidden instability problem means that no change in MCAS can ever make the 737 MAX a safe plane. In fact, reducing the power of MCAS will actually increase the odds of another 737 Max crash in the coming years. The only solution to this turbulence problem is a complete recall of all 737 Max planes.

Unfortunately, because each 737 Max costs $100 million, a recall of all 500 737 Max planes currently in existence would cost Boeing $50 billion – in addition to losing the opportunity to produce 10,000 more planes over time – for a total loss of over one trillion dollars. These are losses Boeing simply cannot afford. 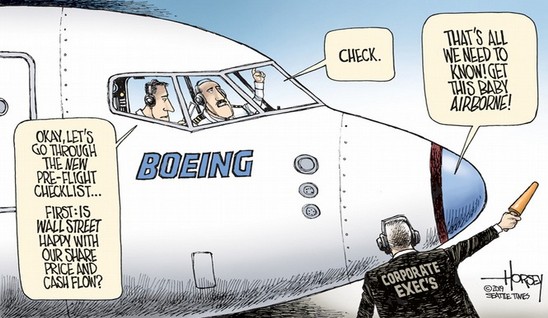 I hope you will take the time to read this important report and share it with anyone else you know who may be interested in this topic. This report is divided into the following 10 sections (each on its own web page):

1 Why Boeing is Going Special Report

2 The Biggest Lie about MCAS

3 Why Boeing only used one Angle of Attack AOA Sensor

6 Calculating the Odds of the Next 737 Max Crash

7 Corruption as a Business Model

8 The Thin Line from Financial Success to Financial Disaster

10 The Case for Public Ownership of Boeing

You can also download this report as a PDF document at the following link:

If you have any questions or comments, feel free to email me at

This is a story the corporate media does not want you to know. It is an article about the demise of a once great airplane manufacturer. Many people are wondering how Boeing executives could have made such bad decisions that led directly to the death of 346 people. This report will explain why the 737 Max problem is not merely a software problem. The real problem can not be fixed by any software patch. The plain truth is that Boeing placed short-sighted greed above human lives. This extreme greed led Boeing to built a plane that is so unstable it is literally designed to crash. Below is all that is left of an Ethiopian Boeing 737 Max that killed all 157 people who placed their trust in Boeing. 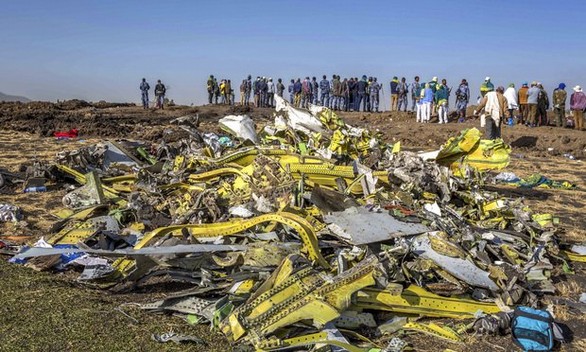 Boeing continues to place short term corporate profit above the safety of people. Therefore, more 737 Max planes will crash. More deaths will occur. Soon, no one will want to fly on a Boeing plane. Then, some day soon, Boeing will be out of business. Boeing is a corporation recently valued at more than $250 billion dollars. But once the truth comes out, Boeing may have no value left at all. This will not matter to the people who made these terrible decisions. These corporate executives will have made millions of dollars in compensation and stock options. And thanks to our extremely corrupt government, none of them will go to jail.

Below is all that is left of an Indonesian Boeing 737 Max that killed all 189 people who placed their trust in Boeing. 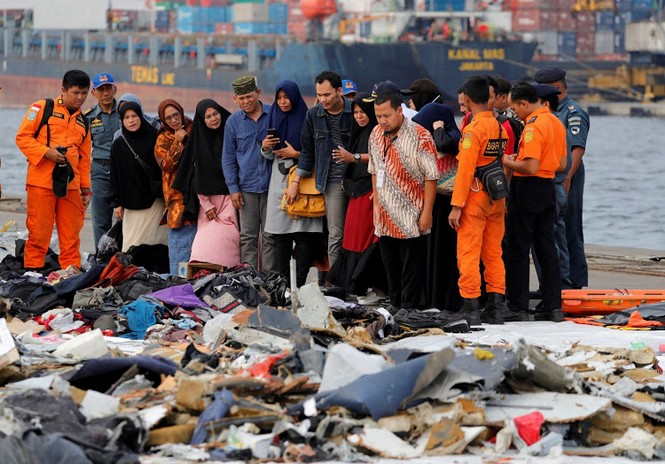 In this article, I explain the history of how Boeing executives were seduced by short term greed, combined with extreme arrogance, to make such incredibly bad long term decisions. This is an important story because Boeing is not the only corporation that has been seduced by the desire to maximize short term profits. Boeing is not the only corporation to have corrupted democracy by buying politicians. My hope is that by telling this sad history, others may change course before their corporation suffers a similar fate. And I hope that voters will become wiser about the people they elect to represent us.

For more than ten years, I have written articles about a culture of corruption in the upper management of Boeing. I and many others have predicted that this would not turn out well. Now the lust for short term profits that was inbreed in the Boeing culture of corruption has turned into a fatal virus called the Boeing 737 Max – a virus that has so infected its host that the case is now terminal. This article will explain why Boeing is going. There is no cure for the 737 Max. Thus, there is no cure for Boeing.

I am not happy to be proven right about the fatal flaws of the lies, greed and arrogance of Boeing upper management. My grandparents moved to Seattle in the 1930s to work at Boeing. Both of my grandparents knew Bill Boeing first hand. My grandfather helped start the Machinists Union at Boeing. Both of my parents grew up at Highpoint – a community not far from Boeing Field and built by Bill Boeing for his workers. I was born in Seattle not far from Boeing Field.

My aunt also worked for Boeing. I still have several more distant family members who work for Boeing. Many of my friends work for Boeing. And hundreds of my former students have worked for Boeing – some at Renton, some at Bellevue, some in Seattle and some in Everett. They are all about to lose there jobs. If you think this is an exaggeration, then you need to keep reading. Things at Boeing right now are not just bad. They are worse than your worst nightmare.

The full truth is not yet out. I am in a unique position to summarize the deeper and darker layers of this problem. It is not merely that I have been writing about Boeing corruption for years or that I know a lot about the inside story of problems at Boeing. It is that I have instructed courses in Problem Solving at Bellevue College for 20 years. I often used Boeing in my college courses as an extreme example of what happens when short term greed is placed above the long term interests of workers and the public.

I also have a degree in Science Education, including a major in Physics. I have taken courses in aerodynamics. I understand the complex equations of how planes fly. When I say that the Boeing 737 Max is the most dangerous commercial airplane ever built, I am not saying it to be mean. I am saying it because it is a fact. As I explain further below, the 737 Max is a very unstable plane. It was badly designed – so badly designed that it can not be fixed by any software program. Boeing and their accomplices at the FAA are simply misleading the public and investors on this issue when they pretend that the 737 Max only needs a software patch.

One thing humans have trouble understanding is the consequences of events that have low probability but highly adverse outcomes. Plane crashes are different from car crashes in that when a car crashes, typically only a few people are killed. A fatal car crash barely makes the newspapers.

But when a Boeing commercial jet crashes, close to two hundred people are killed and the event makes the news all over the world. Plane crashes are extremely bad advertising. It does not matter than 10,000 Boeing planes were in the air that day and only one of them crashed. People have vivid imaginations. People make emotional not rational decisions. If people know that they can fly on a well designed, stable and safe Airbus 320 Neo or fly on a poorly designed, unstable and dangerous Boeing 737 Max, they will either fly on the Airbus or they will not fly at all. Price is no object when your life is at risk.

The day the public finally finds out about the real danger of the 737 Max, is coming because the 737 Max is a terribly designed Frankenstein airplane – unlike any other commercial airplane ever built. In this article, we will show that the new LEAP engines were simply placed too far above the wing. This is the problem that cannot be fixed by a software patch. This is the real danger being hidden from the public.

Instead of scrapping this plane, it is likely that by August 2019, the FAA will approve the software patch. Once the FAA allows this plane back up in the sky, there will be more crashes – just as sure as there is rain in Seattle. Once another 737 max crashes, the public will refuse to fly on this death trap. Then carriers will refuse to buy the 737 Max and demand hundreds of billions in refunds for the hundreds of defective 737 Maxes already in their inventories. Then Boeing will no longer exist. Boeing will go bankrupt. That is how badly the Max was designed. It is a deadly design that not only kills people – it is a financial death trap that will kill the entire Boeing corporation. At this point, Boeing executives have made so many fatal errors that there is no longer any way to stop this series of deadly events.

In this article, we will explain a few of the most important errors that led to the death of not only hundreds of people – but the death of one of the world’s oldest plane makers. We will explain why the Boeing 737 Max is likely the most dangerous commercial airplane ever produced. Barely two years after it was introduced, there have been two horrific crashes that killed a total of 346 people. So much for the Introduction. Now for the deadly details. We will go over the financial collapse facts later in this report. First, we will review the technical collapse – the unfixable design problems - that led to the 737 Max, doomed hundreds of people to a horrible death and soon will doom Boeing itself.